Mention of Richard III reminds me that the Tewkesbury Festival is coming up on the 12th and 13th July, and I'm delighted to give them a bit of free publicity. It appears this is the 25th year of the Festival and so they are laying on a few extra activities and attractions. If you can make it, do go along, you're unlikely to be disappointed. If you visit the Richard III Society, Worcester Branch stand they may even have a few copies of my books left! 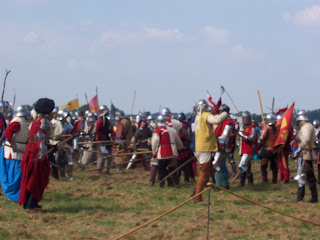 The battle is always the highlight. Though you should be warned, the Yorkists don't always get to win!
Posted by Brian Wainwright at 17:56 5 comments:

I read in the paper the other day that Nappa Hall in Wensleydale is for sale. In Richard III's time it was the home of the Metcalfes, who were among his most trusted followers.

If anyone fancies moving, I understand they want offers over £500,000, and that some remedial work is needed. It'd certainly be a nice place to live, but I don't quite have that kind of cash in my Post Office Account and I'm afraid that a Certain Lady wouldn't let me move there if I had. So if there are any wealthy Ricardians out there, I say good luck to you!

Oh, and a link to a page about the Metcalfe Family
Posted by Brian Wainwright at 17:44 No comments:

The Big Fight That Wasn't

OK, I know anyone interested enough to read this stuff will be well aware that the Big Fight never took place - because that awkward King Richard II stopped it before the first round even started. By doing so he cheesed off almost everyone alive then and every historian since.

Richard was in a dilemma. If Thomas Mowbray had won, how would old Gaunt have reacted? Let's just imagine Henry Bolingbroke, defeated but not killed, going up for the chop. Would Gaunt have sat there and let it happen? Assuming he did, it wouldn't exactly do much for his relationship with the King, would it? Moreover, Mowbray had proved himself a bit of a loose cannon. Lord knows what he would have done - vindicated in this quarrel - for an encore.

What if Bolingbroke had won? Well, that would give a massive boost to an individual who in Richard's books was already far too popular. Plus it would open up the question of Thomas of Woodstock's death/murder/private execution, which Bolingbroke obviously saw as a Bad Thing. Whereas Richard undoubtedly saw it as a Good Thing, and wanted it forgotten. Preferably yesterday.

So Richard stopped the fight and banished them both, Mowbray for life, Bolingbroke for 10 years. In effect he decided they were both guilty, but Bolingbroke not quite as guilty as Mowbray. Lots of people, then and subsequently, thought this harsh on poor old Henry. In terms of justice they were probably right, but then again, medieval justice, especially in the area of high politics, was not noted for being fair and reasonable.

Bolingbroke was told that if his father died during his absence he would be allowed to inherit, and he was even given power to appoint attorneys to act for him in that event. It appears Gaunt was in reasonable health at this time, and his early death was not anticipated.
Posted by Brian Wainwright at 14:11 No comments:

Henry Bolingbroke, having probably talked the matter over with Daddy, broke his tale to the King on or about 20 January 1398, and repeated it to the Parliament that reassembled at Shrewsbury later that month. Richard's initial response was to strip Mowbray of his offices of marshal and admiral. In addition, although Bolingbroke was granted bail on various sureties (including one from his loving cousin, Edward of York) Mowbray was banged up in the Great Wardrobe in London. This suggests that at this point the King thought Henry was telling the truth.

On 23 February, Mowbray was brought before the Council at Oswestry (right up on the northern border of Wales) and denied everything. This led to both men having to attend a further meeting at Bristol in March, this time appearing before a Committee of Parliament. Given that neither of the parties was going to back down, and there were no witnesses, it was pretty inevitable the quarrel was going to have to be decided by combat, and this was what the Committee decided. The combat to be under the auspices of the Court of Chivalry - Edward of York, Duke of Aumale, Constable, and Thomas Holland, Duke of Surrey, Acting Marshal, presiding.

It was widely felt at the time time that the King should have reconciled the pair - this was apparently the advice of the French King to his new son-in-law, while John of Gaunt was allegedly angry about his son having to fight over 'a thing of naught.' All very well, but easier said than done. Far from coming to terms, Bolingbroke chose to add fresh charges. He said that Mowbray was behind all the treasons of the last eighteen years, as well as pinching funds from the Calais garrison and being responsible for the death of the late Duke of Gloucester.

Arrangements were made for a combat outside Coventry on 16 September, and both parties sent off for mail-order armour for the occasion. Edward of York, as Constable, had the job of organising the Big Fight. If only sponsorship had been invented in those days, they could have made a fortune!
Posted by Brian Wainwright at 17:36 No comments:

I am currently making great use of Richard II by Nigel Saul as a reference source. It's undoubtedly the best book available on King Richard (by several lengths) and one that I was able to refer to in the later stages of writing Within the Fetterlock. I doubt I'd have had the courage to have the King visit Hanley Castle but for the handy itinerary in Professor Saul's work that revealed his visit to that very place!

Although I am getting slightly ahead of myself, there's one passage I must quote before I forget:

Richard could be forgiven for thinking...that his ascendancy over the realm was complete. Gloucester and Arundel were dead; Warwick was in prison; and Hereford and Norfolk had been condemned to exile. Financially he was secure. His wife's dowry and the confiscated wealth of the former Appellants had replenished his coffers. Parliament had shown itself agreeably compliant in enacting his will; and the nobility, and political society more generally, had been reshaped in his image. Never before had the power of the crown been raised to such dizzy and exalted heights.

I put it to you, ladies and gentleman of the jury, that we are talking here about a king who is generally regarded as incompetent, inept, out of touch, or just a plain fruitloop. So taking that into account, this was not a bad achievement, was it? Just think what he might have achieved if only he'd been clever, effective, and sane!
Posted by Brian Wainwright at 19:39 1 comment:

You may recall that Thomas Mowbray, Duke of Norfolk, and Henry (Bolingbroke) of Lancaster, Duke of Hereford had at least one thing in common. They had sided with the Appellants against Richard II in 1387/88 and with Richard II against the other former Appellants in 1397. They were issued with nice new pardons to go with their fancy new titles, but both must have been aware that they were not exactly flavour of the month with the King.

One day in December 1397, near Brentford on the outskirts of London, Henry Bolingbroke was riding along the road, quietly minding his own business. Along came Mowbray, who took him aside, and told him of a massive conspiracy that was going to ruin them both.

This is according to Bolingbroke, and, annoyingly, we only have his side of the story. As usual with historians, when there is only one side to a story available they tend to accept it as being true. I put it to you, Dear Reader, there is a possibility that it could all be a steaming pile of BS.

Anyway, according to Mowbray (according to Bolingbroke) the King was still out to get them for the events of 1386-88. Moreover, there was a court conspiracy to dig up the judgement on Thomas of Lancaster (Edward II's reign, please refer to the excellent Alianore blog for detail) and use it to forfeit the Lancastrian inheritance. The Duke of Surrey (Thomas Holland the King's youngish nephew) and the earls of Wiltshire (Scrope) and Salisbury (John Montagu) had drawn the Earl of Gloucester (Thomas Despenser, York's son-in-law) into a plot to destroy Gaunt and, while they were at it, take out Aumale (Edward of York) Exeter (John Holland, the King's half-brother) and Worcester (Thomas Percy). These last three, plus Norfolk, had taken an oath to resist this. Oh, and the King was trying to bring March into the plot too.

If there was truth behind all this, it would have made the night of the long knives look like a Sunday picnic! What it perhaps does demonstrate was that there were a lot a frayed nerves out there, and that men were looking for friends and fearing potential enemies.

It is true that there was a degree of hostility to and jealousy of John of Gaunt. This was nothing new, it had being going on for almost the whole reign. Something particular was developing in early 1398 because Sir William Bagot was bound over in the sum of £1000, which he would have to forfeit to the King if he was shown to have brought about the disinheritance of Lancaster or his family. A couple of days later he submitted to be executed without further process if he were to kill or put to death Gaunt or any of his family! (If you're interested you can find these amazing documents in the Calendar of Close Rolls 1396-7 pp 291-2). It's worth mentioning that although Bagot was at this point a favoured servant of the King, it was not that much earlier that he had been a retainer of Lancaster.

It seems likely that someone, maybe even the King, was behind Bagot's apparent plotting. However, it does beg the famous question posed by Charles II to his brother. Who would kill me, to have you? King Richard had achieved a modus vivendi with Gaunt. Why on earth would he want to get rid of Gaunt and have Bolingbroke in his place? I don't have a simple answer. Of course, potentially, if you could take out the whole of the House of Lancaster, there would be a huge amount of land and patronage to redistribute. Some ambitious lords may have dreamed of this possibility, but it was, as they say, a Big Ask.

Ironically it was Henry Bolingbroke who, by broaching this story, set in train a series of events that almost did destroy his House.
Posted by Brian Wainwright at 15:21 No comments:

Within the Fetterlock Cover

Blogs I Read (and enjoy)